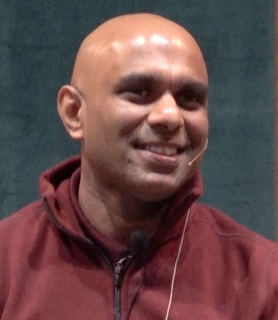 Emerging spiritual interests in his early teens led Sathi to be ordained at age 19 in the Theravada tradition in his native country of Sri Lanka.  He also became Bhikku and practiced many years and counseled people from many walks of life using Buddhist teachings.

As a meditation teacher, In 1999 he became a resident at the Great Lakes Vihara in Michigan and traveled around the US and Canada teaching meditation and mindfulness practices, the teachings and philosophy of Buddha (Dhamma), and leading retreats.

In 2003 he made Minnesota his home where, with the support of friends, As A Teacher, he founded Triple Gem of the North in Mankato, which he made his home. He has traveled the state sharing meditation and mindful living. He has shared his wisdom, led retreats and given talks at various Minnesota locations including.

Responding to invitations, Sathi has planted many seeds of Buddha’s teachings across the United States from which several have blossomed into centers started by Sathi:

Sathi has a particular interest in what is common to all traditions and all schools of Buddhism, particularly regarding the practice of meditation since establishing himself in Minnesota.